Another new Nissan Titan XD Truck.    Nissan brings out the second in-between XD pickup but with a gas engine. 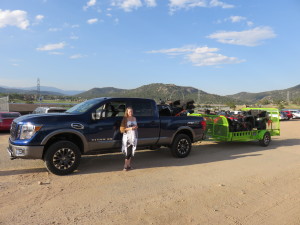 It’s the same truck we reviewed earlier with the Cummins diesel, but now the 5.6L V-8 gas engine and new 7-speed automatic tranny. Same body, same frame but the gas version is 500 lbs lighter without the diesel engine, DEF tank and different exhaust.  This gives the all aluminum 5.6L V-8 a big space in front of the engine.

This truck feels like a heavy duty truck but a little more nimble than the diesel version, due to less weight especially up front and one more gear in the tranny improves staying in the power band between gears . Slightly better acceleration but less fuel mileage. The diesel versions I’ve had would average 17 mpg and I had to work at it to get the 5.7L Endurance V-8 gasser to 13 mpg. I’m sure a trip to Kansas would improve those numbers. I expected the 3.36 rear axle ratio would do better. The Cummins 5.0L diesel had a lower rear at 3.92 final drive. Both versions come with the gooseneck ball setup and the best bed cargo management rail system, I use for my ATV’s. 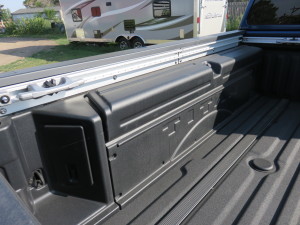 This truck has the new Titan Box. It fits below the bedrail for use with a shell. It does give you more lockable space. It doesn’t come out easily and if you have cargo in the bed like an ATV, you can’t open the lid much. It’s bottom lip measures 4 ft. on top of each Titan Box floor lip so you can get 4×8 plywood in the bed. 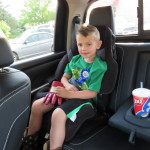 The gas XD is $4000 cheaper than the Cummins option.  Brakes are the same on both XD’s with slighter larger rotors on the rear with a very level balance brake feel. The same push button start, integrated trailer brake controller and the trailer light tester built into the key FOB.  The bed LED lights and cargo light are bright and useful. I think I’ve driven eight of the XD’s now and none of them squatted much with a trailer. Though Nissan has a dial on the dash to change the headlight angle when you are loaded. The 26 gallon tank seems small for a trailering truck.

This PRO-4X had all the luxury and convenience packages means leather heated and cooled everything even a memory on the power tilt and telescope steering wheel, which added  $4,820 to the price making the total MSRP $53,085 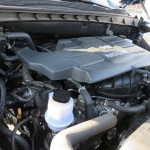 Later this year the Titan 1/2 ton truck will come out with the same 7-speed tranny with 5.6L gas V-8 and a V-6 version which is the direct replacement for the Titan that was born in 2002.
store.mrtruck.com