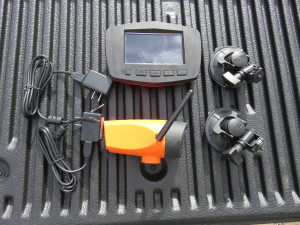 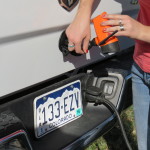 Hyndsight Vision Systems, the versatile on board camera you’ve been waiting for. We tried it out backing to a trailer, monitoring horses inside the trailer and watching traffic behind the horse trailer. I’m a fan of wireless camera’s.  About the most useful tool you can find. We’re getting use to the backup cameras on the new trucks I review. But they don’t stay on, as soon as you go forward, they shut off. Hyndsight stays on so I can watch my bed cargo and the straps flapping in the wind. At the Ford Super Duty 2017 reveal at the State Fair of Texas, Ford showed us 7 cameras on the new truck. Five of the cameras are for the trailer including a camera at the rear of a trailer.   Hyndsight camera system for backing to trailers, monitoring trailers, RVs, horses, farm equipment and backyard. 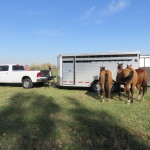 My 40 years of towing trailers included hauling horses, sheep, cattle, hay and tractors. Horses can get tangled in lead ropes or just arguing with their neighbors and get turned over. Cattle never stop moving in a trailer and knock each other down. A camera in a trailer will tell you something needs fixing before there’s a tragedy. For more info and pricing:  HyndSightVision.com 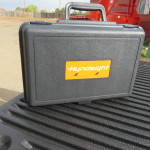 We used the Journey Kit that comes in a hard case pictured left. Hyndsight keeps a good signal between the monitor and cameras. They’re easy to pair. I’ve used corded cameras in the past and each one had a small connection to twist together, not much fun when they are covered in snow. With up to 4 cameras paired to the monitor, you can watch one camera at a time or let them rotate every 7 seconds. Battery life for the adjustable monitor and cameras is 5 to 8 hours which is the longest I know of. 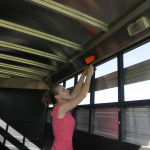 I spent my first 32 years on a farm. It’s a dangerous place to work, combines, swathers and grain carts. I know several farmers that lost fingers and an arm. A friend of mine was about 10 when she stuck a finger in a hole on a hay baler. I lucked out and have all my appendages. Police and military use robots when their work gets too dangerous. Cameras can show you whats dangerous without risking your piano playing. Wire free cameras are more convenient. Hyndsight Vision Systems are well made. Heavy Rubber casing on the monitor and cameras means they aren’t fragile. The cameras are more than weather proof, they are water proof and can float. The hard case they come with makes it practical for hauling the camera system with you to work, vacation, and the field. 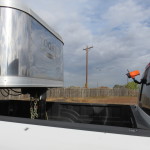 There will come a day when cameras replace your truck mirrors. With trailers that are 8.5 ft. wide, mirrors don’t show you enough. You need to see the back corners of your trailer, wire free cameras can see whats behind your trailer before you back into that $100,000 Lexus belonging to a TV lawyer. I pull two trailers together often and backing them up by myself raised my blood pressure. Even just doing a lane change at 75 mph on the Interstates with a trailer can get you tangled with a small car sneaking into your blind spot.

I used Hyndsight cameras to watch cargo in my truck bed that tries to fly out. And then with that camera on my truck back window, I can backup to a gooseneck trailer or on the tailgate for the bumper pull trailer. The big thing now on new trucks and SUV’s is the 360 degree camera. Yes it’s nice to see all 4 sides of your truck. You can do that with 4 Hyndsight cameras. You can mount the cameras to watch under your truck when off-roading or on your trailer to see how close you are to toll booths or construction barricades with your trailer fenders. I bet you’ve seen trailers with missing fenders or dually trucks with cracked fenders. 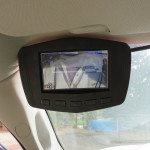 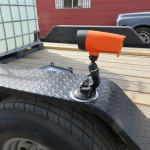 Good signal, the hardest hurdle in wireless with cell phones, radio’s, blue  tooth and weather, is keeping the wire free connection. We tested at about 50 ft between the monitor and the camera with no signal loss. Hyndsight rates their WiFi signal to be 1/3 of a mile. Three power sources, cigarette lighter or 12 volt from trailer lights, 110v house plug or computer USB port. Can you imagine backing up a Class A motor-home without cameras?

Then there’s the barn, yes put the camera on the new babies, watch the next Sea Biscuit foal. Take the Hyndsight kit on the road to your hotel. Plug in the monitor to a wall socket and use the cameras battery or wire to the trailer to watch your $1200 saddles, tools, ATVs, race car or $200 hay bales. If you have a trailer tire with a slow leak and it’s 200 miles to the next tire shop, put a camera on the fender and watch the tire before it costs you. 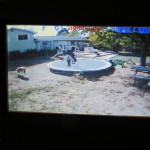 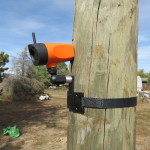 I’ve used the Hyndsight camera to keep and eye on my grand-kids from my office when they jump on the tramp, chase the chickens or play in the water. Camera options abound, narrow and wide angle cameras, antenna extensions, suction cups, permanent mounts, 3M mounts, vice mounts, handle bar mounts, and tree straps. My next adventure will be water skying so the boat pilot can watch me on the Hyndsight Vision System in case the rope brakes and I submerge. 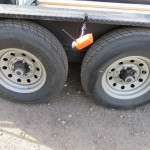 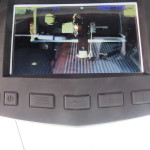 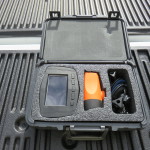 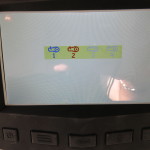 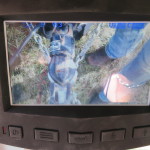 New Capture Camera from Hyndsight in use in Colorado