US Patent, 60-Day Money Back Guarantee 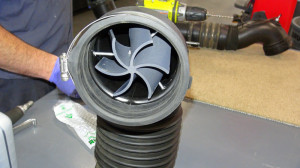 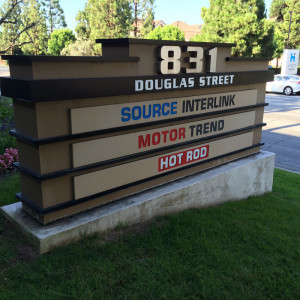 International Testing used in the Automotive OEM’s and Media 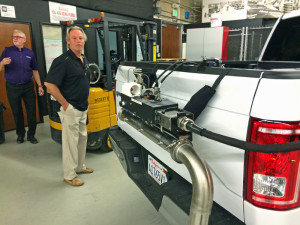 Econo Maxx keeps finding ways to prove they work. At Emissions Analytics in California, intense testing was done to a 2015 Ford F150 with Eco Boost 3.5L turbo V-6. Emissions testing and fuel economy was measured for the tough one “City MPG“ 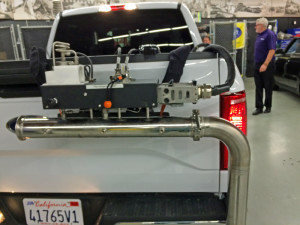 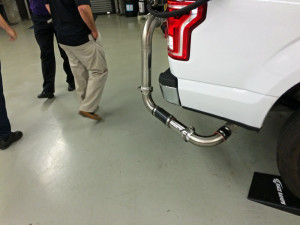 Ballast was for a real curb weight with driver and sand bags  on the right side at adult weight for passenger, rear seat computer equaled the weight of the 2 kids. So 2 adults, 2 kids weight for the tests, all 12 tests. 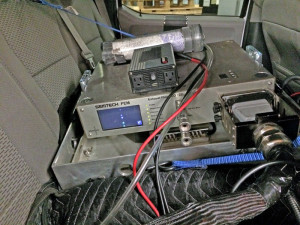 Data collecting computers also doubles at the weight of 2 children 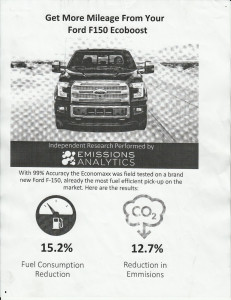 Computer on the rear seat measuring MPG and weight of 2 kids. Testers thought their equipment had a problem, do they purged it twice to double check accuracy. 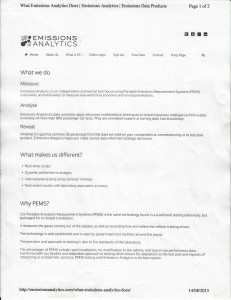 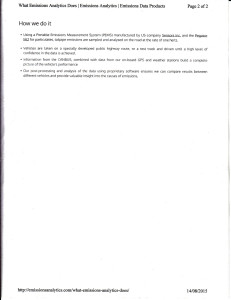 All vehicles use 14.57 to 1 air to fuel ratio. Many truck including Fords 3.5 L Eco Boost, under a load will over fuel to lubricate the top piston ring. You will hear from experts that today’s engines are so efficient they can’t be improved with aftermarket products. Don’t believe it. 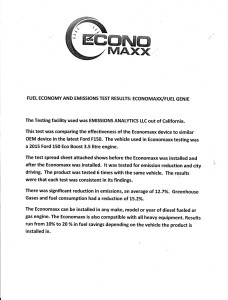 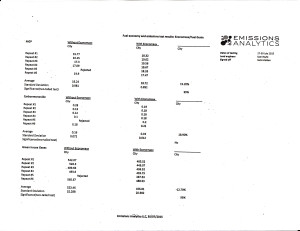 Look at the real official tested results. Shows 15.2% improvement in fuel mileage (2.5 mpg). And that was “city” driving. You know the “highway” test would have been even better. Emissions testing showed 12.7% improvement and that was in California, the toughest place to improve emissions. 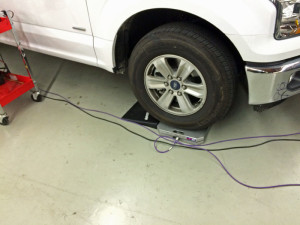 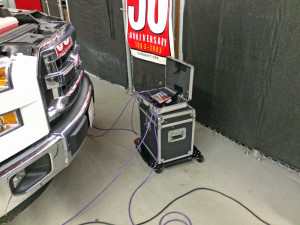 How many computers can you hook to one truck

Weighing the truck to measure fuel consumption, the best way to test. No double clicking on the gas nozzle. Computers measure all the action, data is collected, sent to England and results verified. 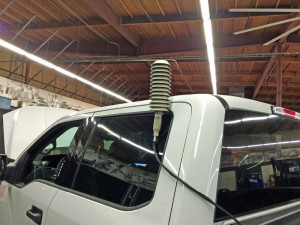 This truck is wired to collect data 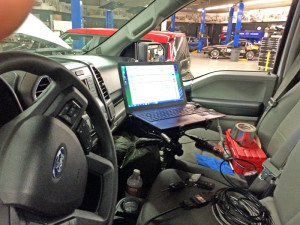 Testing command post as always should be in the truck

Since I review truck and trailer accessories on TV, folks send me products to look at. The Great Recession and fuel crunch from 2008 fueled a lot of fuel enhancing products. Magnets, additives, hydrogen generators and spoilers. The best system I’ve tested was adding CNG (compressed natural gas) to my diesel engine. It dramaticly increased fuel mileage and power. But it was EPA illegal except for off-road use. EPA won’t let you use CNG without injection nor used together with other fuels like diesel, and the system costs thousands of dollars.

The fuel additives I’ve tried did improve fuel mileage a little but not much more than the cost of the additive. That’s the problem, how much does it save above the cost? Even with performance chips and programmers, you may get up to 10% better fuel mileage but it costs you $400 plus to get it.

Diesel engines, I’m a fan of diesels and if you tow big trailers or loads in the mountains you need them. I sold trucks for 10 years and most folks bought diesel trucks for the power rush not that they needed it. But do the math with the diesel engine, pay from $8000 to $11,000 for the engine upgrade and transmission, add the double to triple cost to change oil and fuel filters, add $20 more an hour for a diesel mechanic, and lately add $.80 a gallon more for fuel. Total it up and to pay for all the added expense of owning a diesel engine, you have to drive the truck over 150,000 miles just to break even paying for the engine upgrade cost from fuel savings. The new ½ ton diesels show more promise at paying for themselves sooner but, I’m not going to pay $50,000 for a ½ ton truck to get better fuel mileage.

Lets sort through the claims you heard before with vortex accelerators: 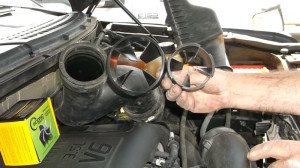 It looks like a restriction in the air intake. I attached a 3 in. PVC pipe to a shop vacuum to test if EconoMaxx restricts air flow or increases air flow. We used the sucking action of the vacuum to simulate an engine intake sucking air into an engine. For the venturi effect, it had to suck not blow like a leaf blower. I cut a slot in the side of the PVC pipe for a wind meter. Then I stuck the EconoMaxx in the end of the tube with the narrow end facing the vacuum. Measured wind speed went from 14 mph without EconoMaxx, to 18 mph with it. That’s 29 % improvement in air movement. Using the suction of the vacuum like an engine intake valves opening and closing drawing air into the engine. Engines are vacuums as well as air pumps. This test proved to me that EconoMaxx is not a restriction but increases air flow with low pressure for more volume.

Does EconoMaxx give your engine more power? We tested a 2014 Ford F150 Raptor with 6.2L gas engine on a Dynojet in Denver Colorado. At net wheel horse power of 267 at mid range just above peak torque band, 4290 RPM, installing EconoMaxx increased horsepower 6 and 8 ft lbs of torque at 326. So yes EconoMaxx does increase horsepower and torque.

EconoMaxx is a one time $100 investment. For most engines it takes less than 10 minutes, turbo engines may take you 30 minutes. So why all the armchair quarterbacks debating if it works in the forums, do your own test, if it works in your truck or car or ATV or motorcycle or tractor etc. then you save hundreds or thousands of dollars per year. If it doesn’t work for your vehicle in 60 days, send it back and get your money back. Life time warranty, Does your doctor give you a 60 day money back guarantee for an office visit?

By combining a vortex and venturi, you change angular velocity. Vortex like a whirlwind increases air speed as it comes out the funnel. Drop in air pressure coming out of a vortex, increase in air speed coming out of a venturi equals more air flowing into the engine air intake. Some of the fuel that goes into your engine is for lubricating the piston rings, more than is needed. So fuel is wasted. EconMaxx pumps more air into the engine to mix with some of the wasted fuel for a 30% better burn rate in cylinders, dropping the fuel load.

EconoMaxx is made from high grade polyurethane. Inventor Brian Leuenberger discovered EconoMaxx for his drag racer Corvette. Brian wanted something more efficient than blowers or turbo’s.

Brian discovered an air accelerator vortex that also works as a venturi for low pressure denser air, like a cyclone starts slower speed at the top and faster coming at the bottom. Shaped like an sail boat or airplane wing, low pressure is created with an angular venturi increasing air speed.

EconoMaxx has a full patent not a patent pending.

Results may vary, with 40 plus computers on today’s vehicles, they are unpredictable, engines are different, intake manifolds are different, air management is different. No risk 60 day money back guarantee, if it doesn’t work you’re only out 10 minutes of your time.

In Canada it was called Fuel Genie, now introduced to the USA as EconoMaxx

What customers are saying:

“Last we spoke at the SEMA show, I had just installed the 3 EconoMaxx units into my ECOBoost F150 in the place of the 2 that were factory installed by Ford.  Before the EconoMaxx I was averaging 22.4 MPG over 5 tanks of gas.  Since installing the Economaxx, over the past two weeks my averages went up to 25.1 MPG.  That includes the trip home from Las Vegas to Phoenix in the mountains of Arizona.  I’m very impressed with the performance as well.  It was very noticeable as I was driving through the mountains.”

(Mike, that’s great! 13% improvement for mountain driving with a one time install)

2007 F150: “I  have had similar type products installed in my air intake to no avail except to spend  $$$$ without any results. I have had this in my Gail Banks aftermarket intake for less than two weeks and less than 2 tank fulls running mostly in town. I already have noticed a good  decrease in fuel consumption and do not know where it will level out. I carry 1/2 ton of sand bags in my truck for traction in the winter and am getting fuel mileage that I would experience in the summer running . I was skeptical and after talking directly with Brian, he assured me of better mileage and what to watch as I drive. Lo and behold, everything he said would happen happened, and I cannot wait to put this into our Nissan Murano. I have one too as I am looking into a 2014 F350 Super Crew Lariat diesel and cannot wait to see what mileage increases this truck will get over stock !!!  Well done guys !!! will recommend to all my friends  who drive gas guzzling trucks !!!!!”  Rick